One of the challenges of working with a big band that has some of the qualities of a network or collective (as opposed to a predictably stable lineup) is that it can be hard to keep track of who played what on any given occasion. Although in the IJG there is a regular core of players who have read the book and get the aesthetic (aka the “schtick”), the exact configuration of the group modifies slightly for every tour or gig. At the very least, there are always at least one or two local subs anytime we play in a brand-new region of the country (or world). 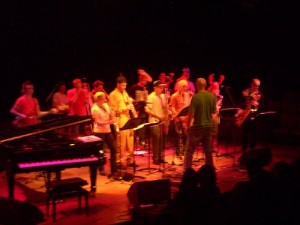 The band that is primarily featured on LEEF is no exception. It’s a mix of old guard folks like Evan Francis and Cory Wright (who were with the IJG from the very beginning (or almost so, in Cory’s case)); longtime collaborators like Beth Schenck, Phil Rodriguez, Brian Walsh, Dan Rosenboom, Dan Schnelle, and Oliver Newell; and brand new folks like Katharina Thomsen and Wolter Wierbos (the Europeans in the group), not to mention three dudes plucked from Darcy James Argue’s (badass) Secret Society (with whom we did our first double bill a few months before our Netherlands trip): Andre Canniere, James Hirschfeld, and Josh Sinton. (It’s worth pointing out, incidentally, that the Bimhuis show was Josh’s very first performance with us.) And of course this band also featured a vocalist with whom I have been working since high school (i.e., more decades than I care to count): Jill Knapp.

However, identifying everyone who appears on LEEF is not that simple, because the story of this album is really the story of two albums that merged. Briefly: in 2006, long before the opportunity to travel to the Netherlands (and record a live album at a world-famous jazz venue) even came up, we started to make a straightforward (multi-tracked) studio record — a set of carefully-recorded tunes, sans transitions, much in the same vein as our previous release, Industrial Jazz a Go Go!. This studio version of the project began in March at Michael Kramer‘s Wolftone Studio in Sherman Oaks, and continued through late 2006, both at Wolftone, and, in a separate session, at Cal Arts (the latter under the capable engineering of Owen Vallis).

Perhaps if we hadn’t gotten so far along with that project — there are nearly-complete studio versions of every tune that finally made it onto LEEF, as well as a handful of tunes that didn’t — I might not have finally decided to take the live/studio hybrid approach with the final product. Of course, the stuff on LEEF is not so hybridized: except for the “Can’t Hurry Love” section of “Bongo Non Troppo” and part one of “Fuck the Muck,” most of the full-tune tracks on LEEF are about 90% live and about 10% studio. (The only exception is “Don’t Let ‘Em Getcha,” which is 100% live.)

Still, there’s some definite studio prestidigitation going on with this record. Why?

Well, I’ll tell ya. Partly I didn’t want to totally waste all the work that had been done pre-Bimhuis. But additionally, as a lover of studio possibilities, I’ve always been interested in making things sound as sweet and full as possible with any IJG recording. This time around, as I started working on the live tracks, I noticed myself repeatedly opting to fly in specific voices — when something didn’t come through clearly on the live recording, or when doubling a voice added a bit more “oomph,” or when there was a flubbed note (though honestly there were very few flubbed notes in the live performance). Alas, the more I did this, the more complicated the project became, from a mixing / production perspective. That’s partly why it took so long to finish, in fact. Let’s just say I discovered that it can sometimes be a real pain in the ass to make a studio part blend convincingly into the context of a live recording.

In any case, the album is what it is (I’m pretty happy with it, certainly). But LEEF has a lot going on in it, personnel-wise. Which brings me back to my original problem: how to communicate exactly who played what where?

To really do this question justice I would need to start annotating specific swatches of time in each tune, and unpack all the edits and layering therein — given how long it has taken me to do this little writeup, the chances of me following through on something like that seem slim. But here’s the next-best-thing: a system I have borrowed from many a jazz discography. To wit: below is the track list. The name of each tune is followed by a letter that indicates the primary personnel configuration on that tune. The explanation of what each letter means can be found below the track list. (E.g., all “A” tracks are mostly live tracks from the Bimhuis show, etc.)

Simple, eh? Check it out:

And here’s the key:
A. The Bimhuis Band

recorded by Micah de Kanter (May 17, 2007) at the Bimhuis (Amsterdam, Netherlands)

(Auxiliary horns (recorded by Michael Kramer and / or Owen Vallis) sweetened these tracks in a few brief spots: Damon Zick on soprano/alto/bari, Ben Wendel on soprano, Mike Richardson and Ron Christian on trombone, Ryan Perez-Daple on tenor, Ariel Alexander on alto.)
B. The Wolftone Band

recorded in random places between 2004-07