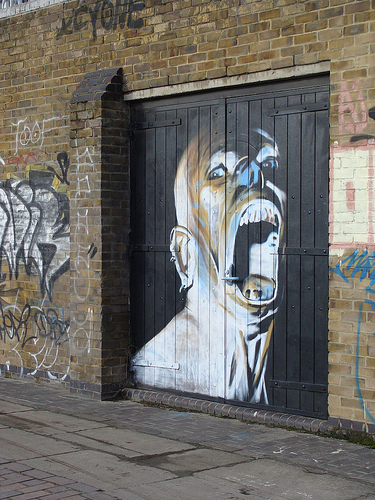 As another one of my crazy schemes to get the word out about this silly band, I offer up the first official IJG remix contest. Ever.

(Credit where it’s due: this was at least partly inspired by a similar contest conducted by Chris Schlarb back in 2006.)

The song I selected for the remix treatment is a “perennial favorite” (if such words even obtain in the land of Industrial Jazz) from our LEEF album: “Howl.” (If you have never heard it before, you can grab it from the ReverbNation player embedded there on your right.)

What we have here, first, is a breakout of every track that went into creating the Frankenstein version of the tune that actually ended up on the album. As explained in the album’s liner notes, said version was actually a combination of live Bimhuis tracks, plus a bit of studio sweetening (from a multi-tracked session that preceded the Bimhuis show). All of the tracks (except drums) are mono, and are taken from the mix that I made at home before lugging the entire session to engineer Nick Moon. Voila:

*** UPDATE! *** In response to several requests for higher quality source material, I have now uploaded AIFFs of all tracks here. (And if you prefer WAVs, I believe that iTunes can do your conversion job.)

*** ANOTHER UPDATE! *** AIFFs have been re-upped here. Should be live until the deadline, but let me know if there are any more problems.

So. What are the specifics of this contest?

Consider it this way: I’m not particularly interested in hearing another mix of “Howl” that attempts to present the tune for “what it is,” and leaves the compositional elements more or less intact. What I am interested in is a true remix, something that re-imagines (indeed, improvises upon) the tune — say, by filling it out with some new voices, or by slicing and dicing its roadmap, or by mashing it up with the latest Christina Aguilera hit. You probably know my aesthetic by now — the crazier, and the more creative, the better.

We (the Industrial Jazz Group) will be selecting a winner based on that set of (admittedly vague) criteria. Said winner will receive $50, and will be given the option (if he or she so chooses) of having their creation included as a bonus track on the next Industrial Jazz Group recording (due out in 2010). He or she will also get a copy of said recording.

(For the curious, entries will be posted in this blog space upon submission — barring any objections, of course.)

Questions and submissions can be beamed (or hurled) at the following email addy: industrialjazzgroup (at) gmail (dot) com.

4 thoughts on “The “Howl” Remix Contest”