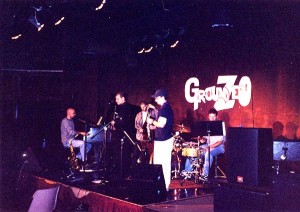 Did you know that 2010 will be the 10 year anniversary of when I started the IJG?

Ten years ago, I was visiting Houston with my wife (though she was not yet my wife). She had an apartment there because of her job, and though I had an apartment in LA because of mine (I was still in academia at that point), the plan was that I would be relocating to Houston too, once the school year was over. I can still remember that winter break like it was yesterday. I had a great time playing piano in the rehearsal rooms at Rice University.

The process of creating that initial version of the group is described in some detail here. But I’ve been hoping to find a more interesting way to commemorate this particular milestone. How’s this: our first album, Hardcore, is not technically ten years old yet — it was released in 2001 — but it was recorded in 2000. Why not offer it up for free (or whatever) on the increasingly appealing Bandcamp.com site?

(I learned about Bandcamp shortly after it launched — but it wasn’t until I saw it put to good use by folks like Jason Parker, Sunna Gunnlaugs, and the Atmos Trio that I thought I would give it a try for myself.)

So: here you go, in all its rough-hewn glory: the first Industrial Jazz Group album, Hardcore. It was a different era (this album was recorded on 2-inch tape!), and we were in a much more straight-ahead vibe — though all of the tunes on this record are Durkin originals, which I suppose lends a certain quirkiness to the proceedings. Evan Francis (who, along with yours truly, is the only surviving member of the original group) really shines on this set, turning in some particularly stellar solos on “Daphne’s Dream City,” “Cozy ‘n Tooty,” and “Art & Commerce.”

2 thoughts on “The bandcamp bandwagon”