Thanks to everyone who came out to our early New Year’s Eve show at Mississippi Pizza here in Portland!

1. “Hard Times Come Again No More / End of Money.” My attempt to provide a soundtrack to impending economic disaster. The first portion is a mostly traditional chorale-type setting of a lovely Stephen Foster tune. The whole lyric is worth a read, but this section in particular just kills me:

While we seek mirth and beauty and music light and gay,
There are frail forms fainting at the door;
Though their voices are silent, their pleading looks will say
Oh hard times come again no more.

Not your usual IJG fare, I guess, but no one has ever accused me of being consistent. In any case, the chorale morphs into a heavily-rock-ified bombastic melody of mine: doom and gloom set to a cheesy metal beat. Much of this latter section is primarily a wordless vocal feature.

Eventually this tune will feature fake mustaches for the whole group (though I have to research the question of whether fake mustaches will interfere with horn playing). It’s the shortest piece I’ve written in a while — one of my aesthetic interests is in trying to pack more and more musical information into shorter and shorter pieces — and it is fairly, uh, frenetic.

We also premiered two short vocal interludes about members of the group. These were funny — if your idea of funny is an image of “two lone bones flying in a glider” (for instance) — though they would have been funnier if there hadn’t been a few last-minute emergency changes to the personnel. These changes resulted in 1. the presence of one player whose name hadn’t been written into an interlude and 2. one player mentioned in an interlude, but not present at the gig because the person he was replacing told him the gig was at 8 PM, instead of 6 PM. Ah, yes.

Finally, at my own behest, we resurrected another old Evelyn Situation tune for this set: “Winter.” It’s astonishing to me that this actually worked — by pure luck, one of our horn players (Mieke Bruggeman, who rips it up on bari through the rest of the set) just happens to be a very good singer as well. She was able to step in and sing the middle part of the tune’s three-part harmony. The arrangement was complete when I asked Dan Rosenboom, who was in the vicinity while the ladies and I were rehearsing the thing, if he wanted to add a little trumpet filigree.

I must say, given that “Winter” is a tune fraught with emotional significance for me (written at a particularly trying time in my own life, in an effort to deal with a failed relationship), the process of revisiting it now, and hearing it come back to life — some fifteen years later — was almost overwhelming. It was like seeing a dear old friend after an extended forced separation. And I must say that the stylistic contrast worked pretty well. (There were many children in the audience, and while the overall raucousness of the IJG shtick surely worked them up — in a good way — I could have sworn that when we started “Winter” the place suddenly got very still and silent.)

Anyway, thanks to everyone in the group for all their hard work. The revised personnel:

Ladies and gennul-men, we have a lineup for our special one-off New Year’s Eve show at Mississippi Pizza here in Portland:

We’re still short one bone player, but now you can’t have everything, can you?

More soon. In the meantime, let’s hope this damned snow goes away before next week. 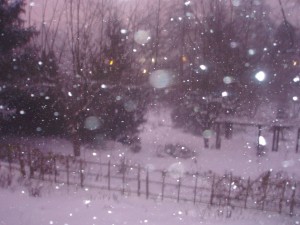 So Jill has been bugging me for some time to actually get up in here and post a damned blog post to this damned bloggy blog thing. And now seemed a good opportunity for me to do so — so that I could chime in and comment on her latest post, if only to add that the actual start time for the gig in question is 6 PM, and that we’ll be done by 8 PM. (In other words, you can bring the kids.)

I’ve no idea what is meant by the pudding in a bathtub remark. It does not in any way refer to any of the props we use in the show, as far as I know.

It also seems apposite for me to mention at this juncture that the fact that any IJG “regulars” are participating in this (very last-minute) extravaganza at all is entirely Ms. Knapp’s doing — she’s the one who is pulling the economic strings to make it happen. So I owe her a debt of big-ass gratitude, I’ll tell you what. (Any of you who subscribe to the “lone gunman” theory of artistic production: it’s pure bunk. There is always a conspiracy. In the case of the IJG, Jill is definitely in on that. Please be advised that without her, this band would be in something of a holding pattern.)

Anyway, I’m still nailing down many of the details for this gig, so I can’t say much more about it at the moment (other than to hint that there are a few surprises, twists, and / or turns in store … I think). What say you we meet here again next week and I give you a full report on how the preparations are proceeding? Right, then. Carry on.