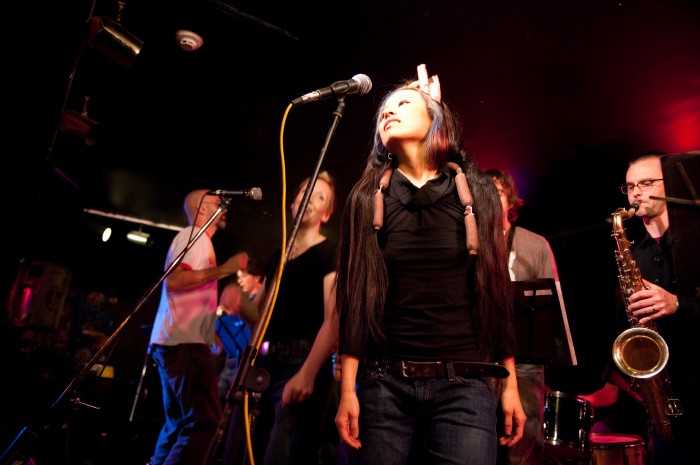 Number of times I hit my head on this tour:  3

Number of times it was earth-shatteringly loud:  2

Number of times it was captured on video:  1

Ever since our band broke the 10+ member barrier, The Industrial Jazz Group has had to figure out how to deal with the challenge of playing in smaller places. It’s fun to walk into a venue and do the mental tetris to figure out how we’re all gonna fit. Even though we have trombones and music stands and a keyboard and furiously gesticulating singers and dance moves and such, we always manage to make it work, and also to make it super-fun.

Friday (10/16) we played at The Green Line Café in Philadelphia and despite the teeny space, we ROCKED it. That was most definitely a biffit: 20,000 pounds of awesome crammed into a 5 pound bag… and by “5 pound bag” I mean an 80-square foot slab of floor that required the trombones to stand on the windowsill so they could play over the heads of the trumpets, and 9 tunes crammed into a 40 minute set. And by “20,000 pounds of awesome” I mean that our show contained booty-shakin’, hootin’ and hollerin’, audience-member smoochin’, and a big-time bangover the next morning. Or: to paraphrase Durkin: “On a 40-degree rainy night, we had the place rockin’ so hard that the venue had to turn on the air conditioning.” Oh hells yes!

On Saturday (10/17) we were invited to play at Galerie St. George, which is an old, huge, beautiful home on Staten Island that’s been turned into an art gallery. Despite the lipstick on this (absolutely gorgeous) pig, this show was still at its essence a house concert. You might be thinking, “How on earth can a 17-piece band play a house concert?” The answer is: With awesomeness, baby.

This event was another biffit: We stuffed 17 people, 15 music stands, a PA, a keyboard, and two mic stands into a 120-square foot center room of this house. Only the band could fit in this room, but the the audience sat in the surrounding spaces and they had a great time, goshdarnit. So did we! It was probably the most unusual setup we’ve ever had, and it was cool figuring out ways to engage the audience. I got to resurrect the signs by parading them around the house, which was good fun. I’ve missed those signs, and I plan on using them for most of our other gigs on the tour. Keep your eyes peeled! 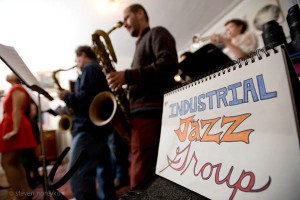 Anyhoo, tomorrow (well, technically today as it’s 12:16am EST, despite what the header might say) we’ll be on a big, beautiful stage in Brooklyn at The Bell House. I’m very excited to share a bill yet again with Darcy James Argue’s Secret Society, and to experience for the first time Travis Sullivan’s Bjorkestra. The show starts at 7:30, and IJG goes on around 9. Can’t wait to see you there!

But now: Sleep. Today was a full day of mystery-gigging and bacon-cookie-making, but I’ll tell you all about those at another time.

I’m sitting in hotel room in Austin Texas listening to the sleet bouncing off my window. Sleet! Actual ice pellets falling from the sky! (Sleet = Ice falling from the sky. Freezing rain = liquid falling from the sky but freezing on the cold surface on which it lands. Weathergirl Jill is here to serve.) This wouldn’t be strange at all if I were home in Philly, but it’s downright strange for Austin; it was balmy this morning. Odd weather in these parts.

To keep myself entertained, I’m nibbling on some single-origin chocolate from Trader Joe’s. I’m not terribly into chocolate (though I won’t turn it down, of course), but I was just kinda in the mood tonight. I should have been in bed an hour ago, but there are travel arrangements to be made.

Travel? Yes, travel! The Industrial Jazz Group is playing New Years Eve in Portland, at the very hip Mississippi Pizza Pub (more than just pizza; it’s a really neat venue), and I’m busy making travel arrangements for band members to get up there so we can rock out IJG-NYE style. There is a teeeeeeny part of me that is sad I won’t be enjoying my tradition of eating pudding in a bathtub as I am wont to do on most NYEs; but this seems like a worthy trade-off.  Besides, since I think we’re playing from 6-8pm (don’t quote me on that), if someone wants to hold a house party, I know of a band.

Have room in your bathtub?  I can bring the Snack Pack.

Thanks to the hundreds of specially-trained piegons working for us, we’ve got 6 shows lined up in the Pacific Northwest (Seattle, Portland, Olympia, etc.).  Check out the specifics on our calendar, which you can find up there under “Shows.”

Is there anyplace you’d like to see us play (other than far far away, you weisenheimer) ?  Gather your friends and demand us using Eventful, and we’ll do what we can to get to your neighborhood.  The more votes a city/region gets, the better your chances.